Our resident celeb expert Rita has been examining some of the high profile divorces for 2017 so far.

“Violent and abusive”: Mel B and Stephen Belafonte 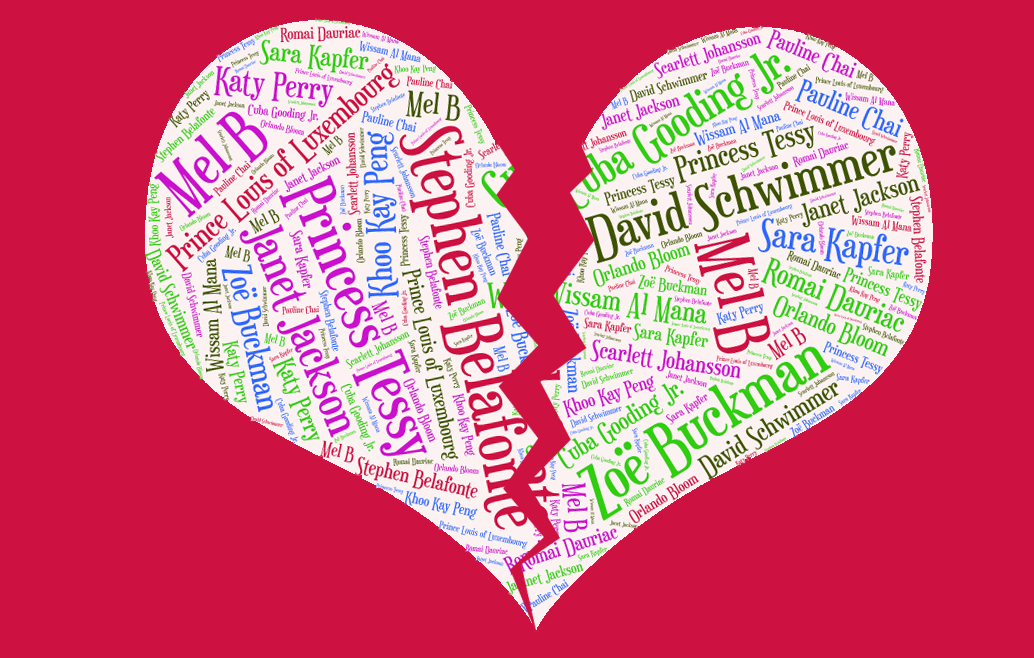 The ex-Spice Girl filed for divorce from her producer husband in March 2017. The divorce proceedings citing that Belafonte had been “violent and abusive”, and had also got their children’s nanny pregnant. Reports suggest that Mel B, real name Melanie Brown, may offer her estranged husband a settlement of $8million plus ownership of their private island retreat. Once again, caught in the middle is a child, 5 year old Madison. Belafonte is also seeking visitation rights for 10-year-old Angel, Mel’s child by comedian Eddie Murphy, born just two months before Mel B and Belafonte married.

The ex-Friends actor and his artist wife Zoë are to split after nearly seven years of marriage. They have one child together.

Prince Louise gave up his succession rights when he married the mother of his son Gabriel. He also gave up succession rights for all their children. Now the couple are to divorce. It’s likely that Louise will still retain his title of Prince of Luxenbourg, but like other processes before her, the right to retain the title may not be conferred on Tessy.

They think it’s all over – it is now: Cuba Gooding Jr. and Sara Kapfer

Married for 20 years, the couple have been legally separated since August 2014. Gooding Jr. filed for divorce in January 2017 citing “irreconcilable differences.” The couple had three children together.

Split but not divorcing: Janet Jackson and Wissam Al Mana

Singer Janet Jackson married Al Mana in a secret ceremony in 2012, but their recent announcement of their split was much more public. Ms Jackson is now a single mum following the birth of their child in January this year. However, according to reports in TMZ.com and quoted in The Sun newspaper, Ms Jackson may have signed a pre-nup with billionaire businessman Wisam Al Mana. Since the couple split at a crucial 5 year milestone in the marriage. this could result in a larger payout, as many US pre-nups have clauses that give bigger pay outs for couples who had been married for five to 10 years.

In an unusual move, French journalist Dauriac has asked Ms Johansson to go back to the negotiating table for the sake of their two-year -old daughter, Rose. The couple married in October 2014 shortly after Rose was born. In a statement to “People” magazine, Dauriac said:

“It is indeed unfortunate, especially for our daughter, that Scarlett filed in court and made our personal differences so public… I would implore her to withdraw her action promptly and go back, as uncomfortable as it might be, to the negotiating table. We are the parents of a lovely daughter whom we will continue to co-parent for many years and share her joys and sorrows as only a parent can.”

It was good while it lasted: Katy Perry and Orlando Bloom

The singer and LOTR actor have split after dating for 10 months. Or, in Hollywood speak, “Before rumors or falsifications get out of hand, we can confirm that Orlando and Katy are taking respectful, loving space at this time.” Whatever…

And finally: the £64m pound settlement

Pauline Chai was married to Laura Ashley boss Khoo Kay Peng for 42 years. She claimed their combined assets were worth £205m, and sought a settlement of £100m from her ex-husband. Khoo wanted to settle her with just £9m. Instead the High Court ruled that Ms Chai should receive £64m in cash and property. The settlement amount may be eye-watering but so is the couple’s legal fees, amounting to more than £6m between them.

We may not be celebrities, but when it comes to getting the right divorce settlements for our clients, we are definitely stars! From our discreet offices in the Hampshire countryside, we have assisted clients in high-worth and high status divorce cases both national and international. If you would like to take advantage of our confidential free 30 minute consultation to discuss your circumstances, just call us.
Share on FacebookShare on TwitterShare on Linkedin