Civil partnership or marriage; the same choice for everyone 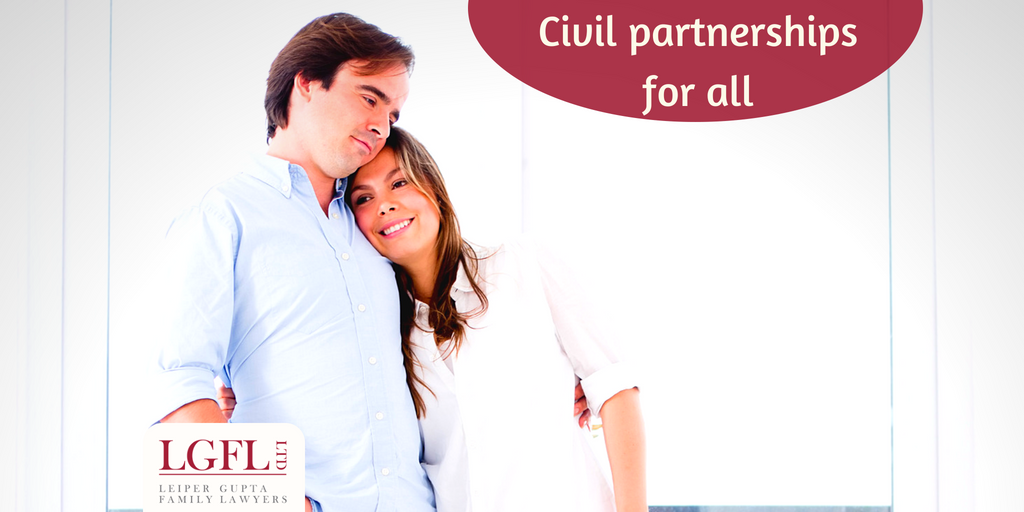 In a landmark ruling, the Supreme Court has unanimously ruled in favour of a heterosexual couple who want to enter into a civil partnership rather than get married.

The Supreme Court decided that the Civil Partnership Act 2004 does not conform to the European Convention on Human Rights in that it applies only to same-sex couples. The issue is therefore about inequality, as heterosexual couples currently do not have a choice, but same sex couples do.

Equality in all things

For Rebecca Steinfeld and Charles Keidan, who brought the case, it’s not a case of equality of legal rights between marriage and a civil partnership. Under current legislation, married and civil partnered couples already enjoy the same legal rights in respect of inheritance, pensions, tax and next of kin status.

It is the discrimination of heterosexual couples having to be married to get those rights that is at the heart of this case. The couple have stated that they do not believe in marriage, but should still have the same right to enter a civil partnership, to protect each other on key issues such as death and divorce. Only opposite sex couple who are married can have these rights, not co-habitees or so-called common law spouses.

So, for opposite sex couples, it’s marriage or nothing, as Mr Keidan explained after emerging from the hearing:

“There are 3.3 million cohabiting couples in this country. Many want legal recognition and financial protection but cannot have it because they are not married, and civil partnerships are not available to them. The law needs to catch up with the reality of family life in 2018.”

LGBT and human rights groups have welcomed the ruling, including campaigner Peter Tatchell, who was quoted by the BBC as saying:

“It was never fair that same-sex couples had two options, civil partnerships and civil marriages, whereas opposite-sex partners had only one option, marriage."

The Supreme Court ruling overturns a previous ruling by the Court of Appeal, which rejected a similar claim by the couple last year. This ruling by the Supreme Court does not put the Government under obligation to change the law, but it is likely to be looked at very closely. Civil partnerships for heterosexual couples have been available on the Isle of Man since October 2016.

Whilst accepting that the current law is unequal in its treatment, previously the Government had claimed it needed more time to decide on the future of civil partnerships.

In his judgement, Lord Kerr dismissed this roundly:

"What it (the government) seeks is tolerance of the discrimination while it sorts out how to deal with it. That cannot be characterised as a legitimate aim."

The future of civil partnerships

The Government issues a Briefing Paper “The future of civil partnerships” on 1 February 2018, outlining the various campaigns that have called for civil partnerships top be extended to opposite sex couples. Long-time campaigner and MP Tim Loughton has tried to get a Private Members’ Bill passed in 2016 and 2017, and outlined the reasons as follows:

"(Marriage) is seen as too much of an establishment thing to do. For many, it is identified as an innately religious institution; even if done in a register office, it has religious connotations. Some see it as having a patriarchal side—as being some form of social control and not a proper partnership. "If just one in 10 cohabiting opposite-sex couples entered into a civil partnership, it would cover some 300,000 couples and their children. It would offer the prospect of yet greater security and stability, less likelihood of family breakdown, and better social and financial outcomes."

However, figures from the Office for National Statistics are not quite so positive. 890 civil partnerships were formed in England and Wales in 2016 (the latest figures available). In contrast, 1,313 civil partnership dissolutions were granted in the same time period. As with marriage, a civil partnership in itself is no guarantee of a longer lasting union. If you need to discuss your future marriage plans, or need to dissolve an existing civil partnership, call us for advice.
Share on FacebookShare on TwitterShare on Linkedin