Converting your civil partnership into marriage: an update

As a result of pressure from the GLBT community and in particular a petition at change.org, the Government has redrafted the regulations for the conversion of a civil partnership into a marriage. This is therefore another stage at which parties should carefully consider entering into a Pre-nuptial Agreement to define the arrangements that would occur in the event of separation or subsequent dissolution of the marriage. 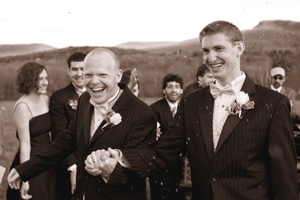 New regulations were laid before Parliament on 15 October 2014 to redress criticism that the conversion had “no heart” by not allowing for any form of ceremony and the issue of a ‘certificate of conversion’ rather than a marriage certificate.
Thanks to the efforts of campaigners and the 40,000 signatures the petition received, once the regulations are passed by Parliament, same sex couples will have a choice of a simple conversion at a registry office, or “with a ceremony at an approved venue of their choice, including religious premises registered for marriages of same-sex couples.”
Most importantly, couples will now be issued with a marriage certificate that indicates that the marriage should be treated as having been in existence from the original civil partnership date. (Hence the importance of the Pre-Nup.)
Minister for Skills and Equalities Nick Boles said:
“I know how important it is for couples to have the option of marriage available to them. This is the final stage in ensuring every couple has the option to be married. This puts couples in control. They have the choice of whether they would like a simple conversion or would prefer to celebrate the occasion with a ceremony.”
The couple behind the petition, Jakki and Sheila Livesey-van Dorst, stated: ‘We have achieved all we asked for, a marriage certificate, a choice of venue, a ceremony with words if we choose and family and friends present, or a simple desk based exercise in one of the many local Registry Offices!”

Converting your civil partnership to marriage after 10 December 2014

The situation, in terms of current regulations and the revised regulations once approved by Parliament, is as follows:

Couple may choose from
OR

The costs of conversions

Converting a civil partnership to a marriage: the background

The passing of the Marriage (Same Sex Couples) Act enables same sex couples to opt for either a civil partnership or a civil marriage ceremony. As of Saturday 29 March 2014, same sex couples not in an existing marriage or civil partnership could marry. The Department for Culture, Media & Sport laid out the minor differences between same sex marriage and civil partnerships in a document in December 2013. (https://www.gov.uk/government/publications/comparison-of-civil-partnership-and-marriage-for-same-sex-couples)
However, since March 2104, this situation has created a ‘two tier’ system, as it was unclear as to the exact status of same sex couples who were already in a civil partnership, (where they ‘married’ or not?) and their pathway to covert their partnership to a marriage if they wished to do so.
The Government stated that: “Civil partners who wish to convert their civil partnership into marriage will be able to do so from Wednesday 10 December 2014, subject to Parliamentary approval of the necessary secondary legislation.” However, the lack of details of exactly how this would happen, and the lack of the opportunity to have a ceremony as part of the conversion process, caused confusion and anger, leading to a successful petition being raised for changes in the regulations.