Rather than sending our Christmas cards in the post every year, Anne Leiper and Rita Gupta have instead chosen to donate the equivalent cost to a charity of their choice. Not only does this benefit two charities that are close to their hearts, but it is also far more environmentally friendly too. 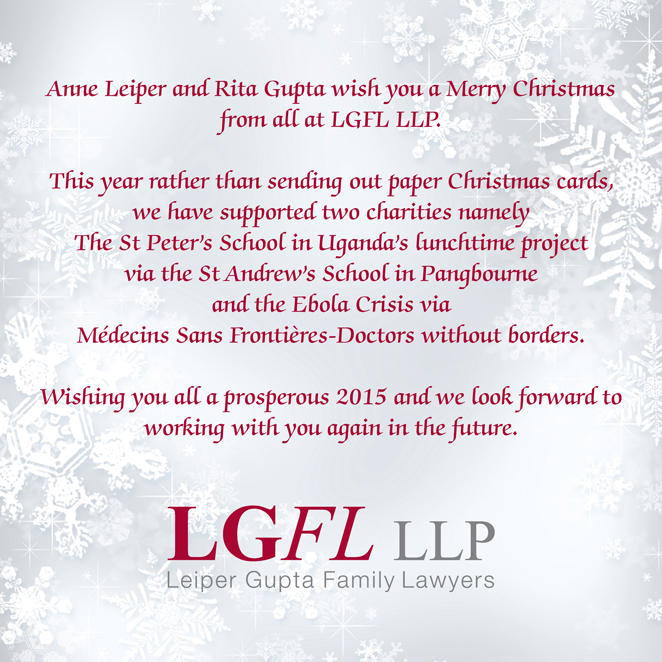 Anne was very moved by the Ebola crisis that has so affected African countries. She has chosen to donate to Médecins Sans Frontières (MSF, or Doctors without Borders). MSF has been at the forefront of the Ebola crisis since March, and currently has more than almost 3,500 staff working in Guinea, Liberia, Sierra Leone and Mali. The charity is treating an increasing number of patients in specialist Ebola Treatment and Management Centres.
Rita always donates to the St Andrew’s School (Pangbourne) charity, as this in turn supports various national and international charities. The lunchtime project touched Rita particularly as it relates to hungry children. The St Peter’s School in Uganda were finding that the performance of the children was dropping in the afternoon, as the parents couldn’t afford to feed them.
Thanks to aid, every child is now given a simple meal, which has helped with attendance and also performance. It’s a simple thing, but it makes a world of difference. Rita feels very strongly about giving the gift of education to developing countries, so they can build a brighter future.
So, look out for your card via email, and the entire team at LGFL wish you a prosperous 2015 and we look forward to working with you again in the future.
Share on FacebookShare on TwitterShare on Linkedin