Not over yet: the link between domestic abuse and football kick-off times 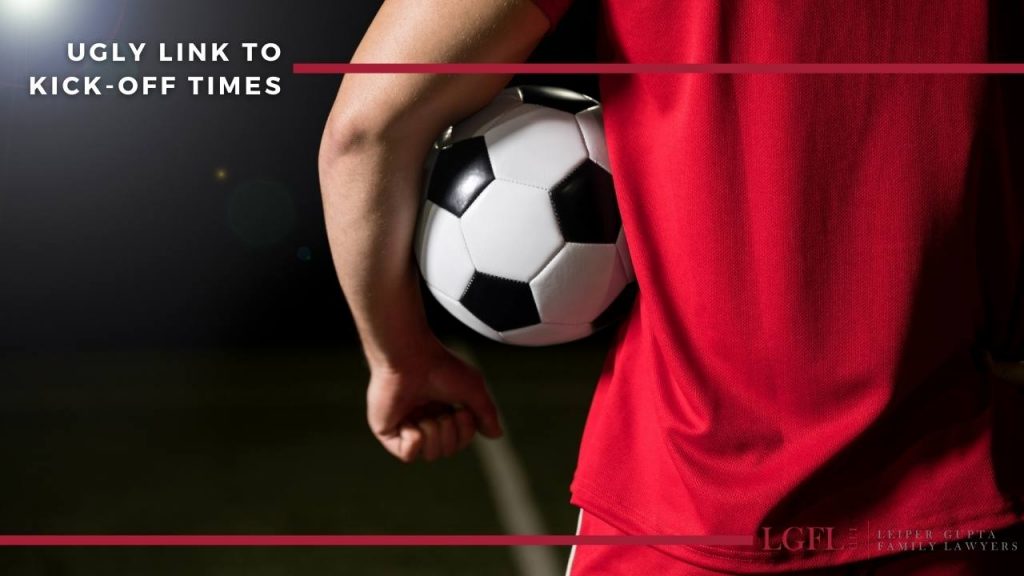 It may be the beautiful game, but there is an ugly link between the timing of football matches and a rise in domestic abuse.

A new study from the London School of Economics and Political Science Centre for Economic Performance (CEP) shows that domestic abuse cases rise when football games kick off at midday or in the afternoon. When games start after 7pm, however, there is no increase in domestic violence.

The research found that while domestic violence decreases by 5% during games, it increases after games end, to reach a peak of 8.5% 10 hours after the game ended.

The link between alcohol consumption and violence has been well established. In March 2018, figures from the ONS revealed that victims of violent crime thought the perpetrator was intoxicated in almost 40% of cases.

The same applies to post-match domestic abuse. As Tom Kirchmaier, director of the policing and crime research group at CEP, explained:

“We investigated why domestic abuse is likelier to occur in the aftermath of football games and found that the increase is entirely driven by male-on-female abuse by perpetrators who have drunk alcohol. The increase also only seen between partners living together – there was no similar rise in ex-partner domestic abuse.”

We would also expect that there is the potential for female-on-male or male-on-male abuse too, given the popularity of football amongst women. The reality is that one third of all domestic abuse is against men.

The researchers noted that it was the “excessive alcohol consumption that usually follows these events” rather than the heightened emotions that triggered the rise in domestic abuse. They concluded that:

“Delaying the start of the games until the evening and scheduling them on weekdays would help prevent a considerable amount of domestic abuse.”

As experienced divorce lawyers, we know we can’t eradicate the link between football and excessive alcohol. However, the simple measure of starting games later in the day would appear to go a long way to reducing the rates of domestic abuse after games finish. So, thank goodness that the biggest match of this year, the Euro 2020 final between England and Italy on Sunday 11th July, had an 8pm kick-off time.

The images of (mainly) male football supporters drinking before and all through recent Euro 2020 football matches have filed our screens, with nearly all footage labelled as “celebrations”.

It’s certainly nothing to celebrate for the partners at home who would suffer regardless, whether England won or lost. In one study conducted during the 2014 World Cup, reported cases of domestic abuse by a partner increased by:

In a bid to support those affected by domestic abuse, pubs in Wakefield are currently serving up pints on special beermats that carry the message “Keep the beautiful game sweet.” A QR code on the mat links to Wakefield Council’s domestic abuse support website.

"The rise in reports of domestic abuse during football tournaments is shocking - it is unacceptable and will never be tolerated … Domestic abuse isn't sweet and we want victims and perpetrators to get the support they need.”

Is football just an excuse?

Charities are also concerned that the football may be used as an excuse for otherwise unacceptable behaviour. Farah Nazeer, chief executive of the organisation Women’s Aid, told The Big Issue magazine:

“There’s something in our culture that allows for people to say, ‘oh it was just the football, we had a bit too much to drink’. None of that is acceptable or tolerable. Alcohol consumption and high emotions attached to the game should never be used as an excuse for abuse.”

“While of course football tournaments do not cause abuse – abuse is a choice a perpetrator makes – they can exacerbate pre-existing abusive behaviours. Abuse doesn’t come ‘by appointment’ – it happens all your round.”

Alcohol, football and the NHS

The link between football and alcohol has further implications too. When England played Sweden in the 2018 World Cup,

“Drunken celebrations ... led to a record number of people going to hospital with alcohol poisoning.”

According to NHS England, on that single day there were 711 cases as opposed to the normal Saturday case numbers of 386.

In addition, a new study by Glasgow and Edinburgh universities will investigate the “lifelong consequences of physical abuse on the brain.” The Drake IVP study is built on “A growing awareness of the association between brain injury and increased risk of neurodegenerative disease, including dementia.” It is perhaps ironic that the new study will be funded by The Drake Foundation, an organisation that has previously financed studies into sports-related head injuries.

If you are experiencing domestic abuse, the time to act is now.

Or see our pages on: