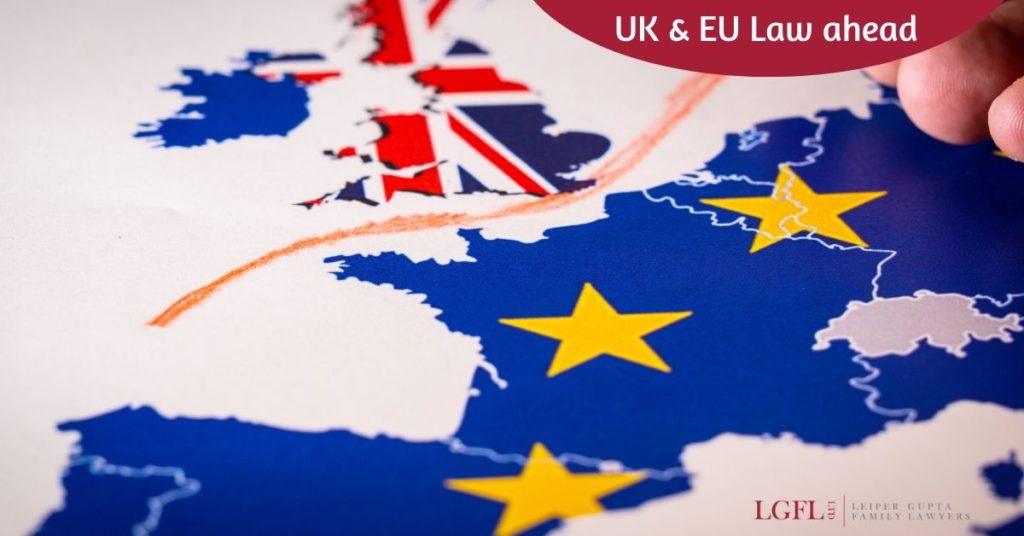 Director Anne Leiper looks at the implications of a no-deal Brexit on family law issues between the UK and EU member states.

As the saying goes, we are indeed living in interesting times. (5)

In the light of the current debate raging over Brexit legislation, the Law Society’s advice on the implications of a no-deal Brexit on family law bring into focus the multi-layered effects of such a decision.

First published in November last year, in time for the first deadline of 31 March 2019, the Law Society guidance lays out the changes that will happen if:

It’s normally a two-part process that involves parliament agreeing to the overall shape of the bill, and then passing the complete bill after detailed scrutiny. However, with no agreement to the shape of the deal from parliament, let alone the detail, the Prime Minister has leapt ahead and published the complete Withdrawal Agreement Bill. This contains, as the BBC’s Laura Kuenssberg says; “Pages and pages of new laws that need to be passed to make our departure from the EU happen.” (1)

If the UK leaves the EU with no agreement/deal, it will involve the UK leaving various EU legal structures with immediate effect. There will be no transition period. A no-deal Brexit will effectively cancel various regulations including:

The UK has adopted much of the EU legislation in a reciprocal arrangement with other member states. If the UK leaves with no deal, these will cease and national law will apply to family law cases. This will affect:

This Regulation “Aims to help international families to resolve disputes, involving more than one EU state, over divorce and the custody of children” (3).

It depends on mutual recognition of family law instruments between the UK and EU/EEA states, which means it lays down rules to:

In practice, this means any EU court automatically recognises a judgement made in another EU court. In a no-deal Brexit scenario, this Regulation will cease to apply.

The Maintenance Regulation ensures that maintenance claims in cross-border cases is paid. It also ensures protection orders are observed to keep safe victims of domestic violence. So, if you have a protection order issued in the UK, it can be invoked in other EU states on presentation of a certificate. This arrangement will cease in the event of a no-deal Brexit.

This Convention “governs the enforcement of foreign judgements in litigation between Swiss and British parties. The UK has never ratified the Lugano Convention, and was only bound by it due to being a member of the EU.” (2)

The Law Society suggests the UK would need to officially join. To do so, the UK must be invited to become a member and the current members ratify that application. Lexology see this slightly differently, suggesting that: “It is currently envisaged that the UK will retain the provisions of the Lugano Convention as part of national law.”

The Hague Convention, which covers areas of law including international child abduction will continue to apply. This is because the UK has ratified the Convention’s elements, with one exception, the 2007 Convention on International Recovery of Child Support and Other Forms of Family Maintenance and the Protocol on the Law Applicable to Maintenance Obligations.

However, UK/EU divorce cases could be adversely affected as:

“The cross-border recognition of judgements in relation to divorce will be governed by national law, unless the states involved are parties to the Hague Convention on divorce. This may result in conflicts of jurisdiction and parallel proceedings in different countries.” (2)

This is because not every EU member state has ratified all parts of The Hague Convention, if at all.

Any treaties and conventions that predate the UK’s EU membership can apply in a no-deal Brexit scenario. However, unearthing what these might be will involve considerable cooperation between lawyers and solicitors in the two countries concerned.

Ongoing cases could be affected if the rules change mid-case, and as the Law Society says; “The risk of parallel cases taken in multiple jurisdictions is a distinct possibility.” (2)

EU member states are allowed to negotiate bilateral treaty agreements with a third country (4). As the Law Society explains;

“This means that once the UK has left the EU, the UK could form a bilateral treaty agreement with an EU member state in relation to family law matters, as long as the member state in question obtains authorisation from the Commission.”

How long such agreements would take to make, and whether every EU state would want to make one, is another issue.

Family law and a no-deal Brexit: our summary

Call us to discuss your situation

If you’re considering legal action in a family law matter involving a member state of the EU, call us. We can talk through your options, identify areas that could be problematic, and work towards achieving your goals via the most effective route.

https://ec.europa.eu/info/sites/info/files/fileimport/civiljusticeen.pdf      “Withdrawal of the United Kingdom and EU Rules in the field of Civil Justice and Private International Law”