Ryan Giggs may have retired from football two years ago, but the former player has probably had more off-pitch attention than he wanted ever since. LGFL Director Rita Gupta tackles the complex issues behind he media reports on this unusual divorce case. 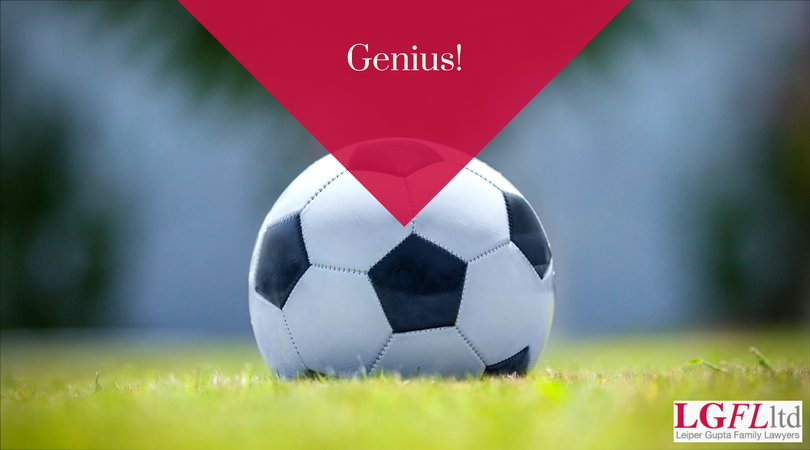 Ryan Giggs could be single again very soon. After years of rumours of indiscretions and public revelations of affairs involved the former Manchester United player, his wife Rebecca finally filed for divorce in 2016.
After nine years of marriage and with two children aged 13 and 10, Ryan Giggs has much to lose when the divorce case comes back to the High Court in 2017. The divorce could cost him half of his £40million fortune, which includes hospitality and property business interests.

“I have nothing to declare but my genius”

However, Giggs is to contest this financial split, and will argue that he made a “special contribution” to the marriage and is therefore entitled to more than half. This will involve calling witnesses to attest to his footballing ‘genius’, and that therefore Giggs contributed more to the marriage than his wife Stacey Cooke.
The strategy is risky, as very few men have successfully argued their exceptional worth in an English courtroom, as an article in The Guardian explains:

“If Giggs succeeds, he will be one of only a handful of men to have successfully convinced an English court that his financial contribution to marriage should overrule the “yardstick of equality” which means the lesser-earning spouse is entitled to half of the assets in a divorce.”

Past performance is not an indicator of future success

Giggs’ team may be relying on a case in 2011 when the man credited with bringing the black bin liner to the UK, entrepreneur Michael Cowen, got to keep 62% of his bin-based fortune in his divorce due to his ‘exceptional contribution’.
However, in the space of a fortnight, two other millionaire husbands have tried and failed to get more than 50%. American banker Randy Work and Laura Ashley chairman Khoo Kay Peng, both lost in appeals to have their exceptional contributions recognised.
In Work’s case, the judge ruled that to award Work more than 50% would be:

“Unjustifiably gender-discriminatory …. This was a marriage of two strong and equal partners over 20 years.”

Life in the media spotlight

Genius or not, Giggs is no stranger to the glare of media attention on or off the pitch. The footballer was dubbed a “love rat” by The Sun newspaper after an 8-year secret affair with his brother’s wife Natasha Lever came to light in 2011. When a subsequent six-month affair with model Imogen Thomas emerged, Giggs spent £150,00 to try and keep the liaison quiet.
Giggs applied for a super injunction to stop the media from naming his as the footballer involved in the centre of a ‘love triangle’. However, it became a very ‘open’ secret after thousands of twitter users tweeted that Giggs was the person involved, and his name was revealed by the then Liberal Democrat MP John Hemming in Parliament.
Natasha then appeared on the tv series “Celebrity Big Brother” where she openly discussed her affair with fellow housemates. In an interview with Closer magazine, she revealed:

“I learnt to live with the guilt and I got very good at lying. I was leading a double life. I do think it’s possible to have feelings for two people at the same time.”

Giggs continued to work in football after the revelations, becoming interim manager of Manchester United in April 2014, and taking on the assistant manager role when Louis Van Gaal became manager in May 2014.
His wife’s patience finally snapped last year, however, when Giggs was seen flirting with waitresses at his Manchester restaurant “George’s”.

At a preliminary hearing in the High Court, Mr Justice Cobb said that the couple’s private lives must be protected as the court battle continues. The judge outlined his views on how the case should be reported in a written ruling.

"That they are divorcing, and that their financial remedy proceedings are being pursued in the English courts, are pieces of information already in the public domain, and the publication of that information cannot legitimately be restrained by order."

Justice Cobb also said the public should not be given detail of private financial information and that reports of the case should not reveal the names of the children. This is, however, rather a case of shutting the stable door after the horse has bolted, given that the names of the children are readily available in online newspaper reports from 2016.
However, it does show that the High Court foresees a courtroom battle and matching media storm approaching, and wishes to shield the couple’s children as best it can.
This is to be welcomed, as this case is set to definitely run into extra time, and we definitely don’t think it’s all over!