How much income do you need? The importance of realistic spousal maintenance 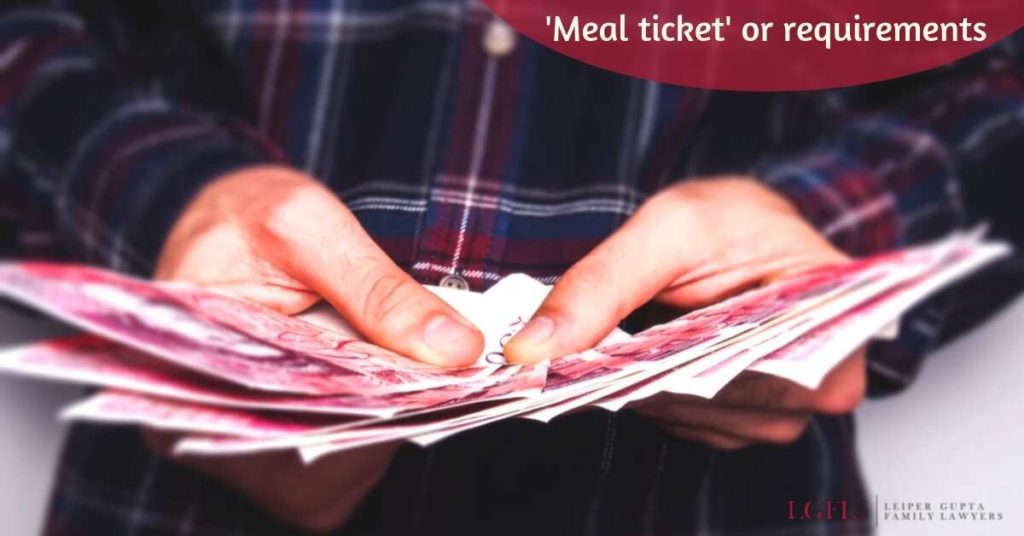 Should spousal maintenance be a 'meal-ticket for life', or a payment just to cover current requirements? At present, the law allows payment of spousal maintenance until the death of the payee. What’s more, a case in 2017 (Mills V Mills) saw a judge increase monthly maintenance payments to his former wife who he divorced over 15 years ago.

Baroness Hale, President of the UK Supreme Court, has said that:

“Research has clearly shown that a person who gives up work, even for a

few years, in order to concentrate on child care or other family responsibilities will never make up what they have lost. It is a dilemma for us all, but particularly for those in the professions who would dearly love to ‘have it all’.”

So, can any spouse really “have it all”? Director Rita Gupta delves a little deeper into this contentious subject.

Having it all v. having what’s realistic

We’ve all seen the headlines where a celebrity wife (and it is usually the wife) demands hundred of thousands per year to maintain the lifestyle they and their children are accustomed to. To many, these can seem excessive, but being wealthy is an expensive business.

At any level of income or wealth, the everyday realities are more pragmatic. There are mortgage repayments and maintenance costs for the family home to be paid, utility bills, food, activities and clothing for children, school fees, car insurance, family holidays, council tax, the list goes on. Then there is the need to provide children with the chance to experience new things and expand horizons through outings, adventures and sports, none of which come cheap.

The rising cost of living

What’s more, these costs are not fixed from the point of divorce onwards; mortgage rates can rise, and utility bills alone have risen by over 3% in the last year alone. Utility bills alone currently account for 5% of the average UK household income, according to MAS.

With an international perspective, the fall in the value of the pound abroad affects the price of European and other holidays. So it’s important that spousal maintenance is based on an accurate figure of ongoing needs, not just covering current costs.

That’s why at LGFL, we work for an accurate settlement that is rooted in the real world of rising costs, economic fluctuations and personal circumstances, which can of course change on both sides.

When you and your spouse divorce, you both can agree that maintenance payments will be automatically increased or decreased automatically year on year. Payments usually change in line with the retail or consumer prices index, to account for changes in the UK economy.

You can also agree a specified term for maintenance to be paid, such as until your youngest child has finished secondary school, or until one of you dies, or remarries. This is known as a Joint Lives order. You can also agree a fixed amount to be paid per month, or a percentage of the payee spouse’s income.

Can spousal maintenance agreements be changed?

You can agree between yourselves, initially through mediation, to vary payments, and then apply for a court order to make that agreement binding. If you can’t agree, one ex-spouse can apply to the court to change the amounts payable.

Courts have a range of powers to change orders or even terminate them. However, judges can differ in their approach to the concept of alterations to spousal maintenance claims.

In 2015, Lord Justice Pitchford ruled that the wife of a wealthy racehorse surgeon should go out to work, and not believe that she should be “supported for life”.

“Mrs Wright has made no effort whatsoever to seek work or to update her skills...I am satisfied that she has worked on the basis...that she would be supported for life. It is essential... that she starts to work now.”

In the speech cited above, Baroness Hale took a more considered approach:

“My own view is that the goal of divorce settlements should be… to give each party an equal start on the road to independent living. But that equal start is bound to involve, for most couples, an element of compensation for the disadvantage, often the permanent disadvantage, resulting from the choices made by both parties during the marriage. Sometimes, but not always, the only way to do this is by open-ended periodical payments. To refer to this as a ‘meal ticket for life’ is indeed patronising and demeaning, but making an award for those reasons is not.”

A transition to independence

The Law Commission has stated that:

“The objective of financial orders made to meet needs should be to enable a transition to independence, to the extent that that is possible in light of the choices made within the marriage, the length of the marriage, the marital standard of living, the parties’ expectation of a home, and the continued shared responsibilities (importantly, child care).”

However, for many divorcees, financial independence isn’t all it’s cracked up to be. The introduction of Universal Credit has caused particular problems for newly-single parents looking to return to work. A recent article on the MSN Money site highlighted the case of a working mum who has a good job, a 10-year-old daughter - and has had to resort to pay day loans after being switched from Working Tax Credits to Universal Credit.

The nub of the problem is cash flow, or more precisely, late payments. According to the article, under Working Tax Credits, monies were paid in advance, allowing parents to budget for childcare and monies to go almost direct from government to child care provider. However, under Universal Credit, payments by the parent/s must be made upfront, and claimed back one month later when proof of payment has been sent in.

This is one reason why this year’s summer holidays are particularly difficult for those reliant on Universal Credit. Childcare costs rise or suddenly appear for children normally at school during the parent’s working hours. Away-from-home holidays, treats, entertainment all need paying for, as does the perennial issue of new school uniforms for ever-growing children.

As the article’s author says:

“It is not easy to say that you are living in poverty; no one wants to stand up and admit that. We want to be proud, not seen to be struggling. It feels so insecure. … We are not asking for extra money, we’d just like the money we’re entitled to, to be accessible when – not after – we need it, at the point we need to pay, to stop the cycle of borrowing and, consequently, debt.”

At LGFL we help clients to delve deep into their finances to work out exactly how much they need for themselves and any dependent children to thrive, not just survive. We encourage both sides to provide full financial disclosure so that misunderstandings and misconceptions about the precise net worth of each party.

Also, whilst we always fight our client’s corner for maximum benefits, we also encourage realism about how much the payee can actually afford. There is little point in demanding large sums if the payee simply cannot afford them, resulting in resentment and hardship all round.

It’s also important to get it right first time as much as possible. A fully contested spousal maintenance application can cost a considerable sum, and the costs may actually outweigh any financial benefits gained for years.

At LGFL, we offer a free 30-minute consultation for anyone considering a divorce, where you can talk through your situation and receive sound, legal advice. One of the reasons we offer this is to meet you, and for you to meet us. You need to see for yourself that we will always fight your corner and work tirelessly for the best outcome for you and your families. In turn, we need to know that you will work with us for the same outcome.

If you would like to meet and talk about your divorce financial settlement needs, or concerns over your current levels of spousal maintenance, call us.