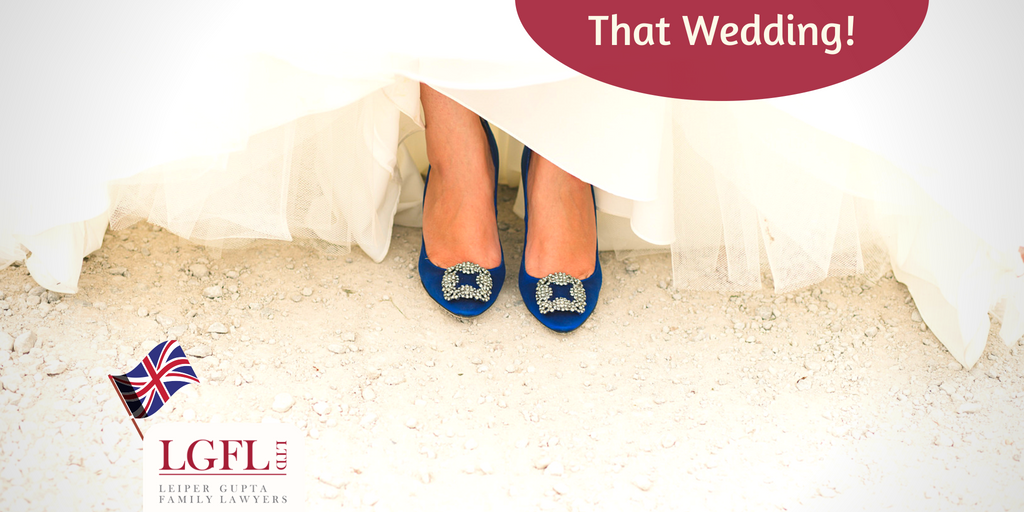 It’s almost here. The Royal Wedding of HRH Prince Henry of Wales (aka Prince Harry) and Suits actress Ms Meghan Markle will be celebrated this week at St George’s Chapel in Windsor Castle. Director Rita Gupta has been discovering some interesting Royal Wedding facts, and their implications for the happy couple.

No pre-nup for this Prince

The couple come from two different cultures in terms of attitudes to pre-nuptial agreements, but neither Harry nor Meghan are strangers to divorce. Ms Markle’s parents divorced when she was six and her own first marriage ended in divorce after two years. Prince Harry’s parents separated in December 1992 and divorced in 1996 when he was aged eleven.

Pre-nups (pre-marital agreements) are commonplace in Hollywood where they are legally binding in Californian law, and protect assets brought to the marriage by either partner.

“The Uniform Premarital Agreement Act (UPAA) has applied to California prenups since 1986. In general, this law states that written prenuptial agreements signed by both parties will automatically become effective once the couple marries. An agreement can cover a couple’s present and future property rights, as well as other matters related to the marriage.”

However, according to a friend of the Prince quoted in various UK newspapers:

“There was never any question in Harry's mind that he would sign a pre-nup. He's determined that his marriage will be a lasting one, so there's no need for him to sign anything."

Given their respective worth, this puts the latest Royal couple in an interesting position. 33-year old Prince Harry has an estimated fortune of £30million, £10million of which he inherited from his mother, and has a reported £20million in assets. Ms Markle is worth an estimated £4million in her own right.

No Royal Wedding is exactly low-key, but by opting to be married at Windsor, the Royal couple can enjoy a more intimate and personal setting than the vast interior of Westminster Abbey. St George’s Chapel can seat 800 people, whilst the Abbey can accommodate 2,000.

Despite this, the guest list runs to some 2,640 people, including 1,200 members of the public who will have access to the grounds of Windsor Castle for close-up views of the couple arriving and departing. As a statement from Kensington Palace released in March said:

“Prince Harry and Ms. Markle would like their wedding day to be shaped to allow members of the public to share in the joy and the fun of the day. This wedding, like all weddings, will be a moment of fun and joy that will reflect the characters and values of the Bride and Groom.”

Sadly, it appears as if the pressure of the Royal wedding may have contributed to Ms Markle’s father Thomas decision not to attend. According to the BBC news website:

A Kensington Palace spokesman stated that:

"This is a deeply personal moment for Ms Markle in the days before her wedding. She and Prince Harry ask again for understanding and respect to be extended to Mr Markle in this difficult situation."

Do you invite people from work?

It’s one of the big questions many brides and grooms will ask - do you invite your work colleagues? In the case of Prince Harry, it’s an emphatic yes. The guest list will include:

It also applies to ex-work colleagues, as:

There will also be an evening ‘after party’ for 200 close friends at Frogmore House in Windsor Home Park.

Flowers from the garden

The Royal wedding floral displays will include plants and flowers from the parklands and garden of The Crown Estate and Windsor Great Park. It’s bound to set a trend for weddings throughout 2018, and de-nude a fair few suburban gardens in the process! The Royal wedding florist Philippa Cradduck says that wherever possible she will use in-season flower and foliage, including beech, birch, hornbeam, garden roses, peonies and foxgloves. To tie in with that natural theme, the couple have requested East London pastry chef Claire Ptak to make them an organic lemon and elderflower cake for their wedding, decorated with fresh flowers.

Who pays for what

The Royal Family will pay for the ‘core aspects’ of the wedding, including the church service, music, flowers, decorations, and the reception. That must be a relief for the bride’s father Thomas, who according to media reports, hadn’t even met the Prince at the time of writing.

The taxpayer will pick up the tab for the security at the event, which could be considerable. The total cost of the wedding of the Duke and Duchess of Cambridge came to over £10million, including policing and security costs. However, the financial benefits to UK businesses and the national economy are likely to be far greater.

Relatively little has been made of the fact that American Ms Markle is a divorcee, in stark contrast to the dramatic step of abdication taken by Edward VIII in order to marry American divorcee Wallace Simpson. Ms Markle has reportedly been baptised to introduce her to the Anglican church. Interestingly, she attended a Catholic school in Los Angeles but is a Protestant.

Ms Markle divorced Trevor Engelson, a film producer, in 2013 after just two years of marriage. Much has been made of the reference on the Royal wedding invitation as a “Ms” rather than a “Miss”, as Catherine Middleton was. This might be a subtle reference to her divorcee status, but more likely, we think, a nod to Hollywood, where female actors are always referred to as “Ms”, regardless of marital status!

As a former UN women’s advocate, it is highly unlikely that Ms Markle will choose say the words “obey him” and “serve him” in the wedding ceremony. This is optional, after all! Prince Harry may also opt not to wear a wedding ring, just as his brother doesn’t.

Saturday 19th May is also the day of the FA Cup Final. Luckily the wedding service starts at 12noon, followed by a lunchtime reception, and then a long afternoon break before the evening reception. This gives any dedicated Chelsea or Manchester United fans at the wedding time to hoof it to Wembley for the 5.30pm kick-off there.

One man who will be making the Windsor to Wembley dash is Prince William, who will double up as best man to his brother, and presenter of the FA Cup trophy in his role as President of the FA. He’ll then probably return to Windsor by helicopter to join the evening party, according to a newspaper report.

All at LGFL Ltd wish the couple a long and happy life together. After all, while 42% of UK marriages end in divorce, that also means 58% don’t!