Without Prejudice in family law: what it means and when to use it 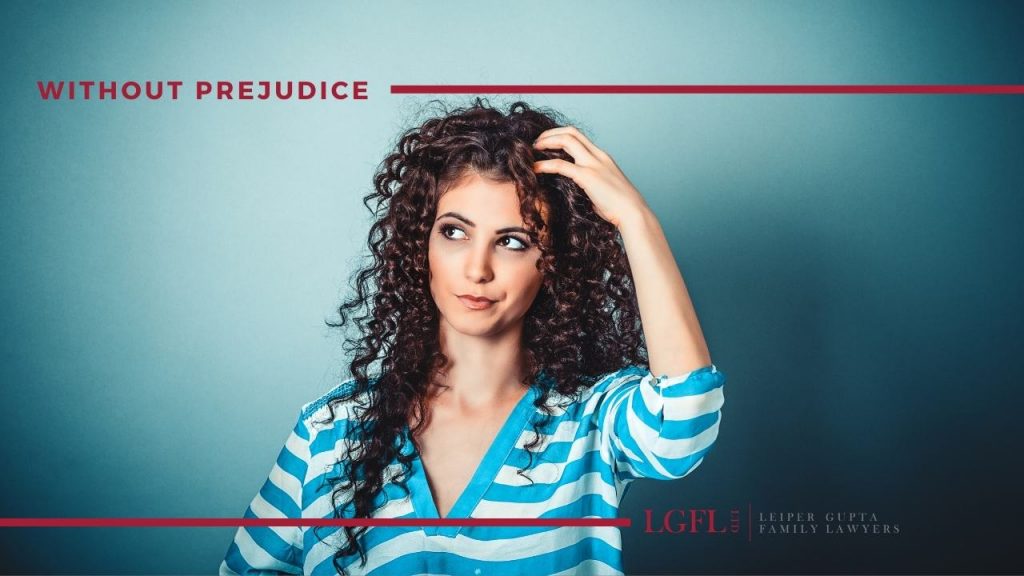 The “Without Prejudice” principle can be very useful when corresponding about any legal matter, including your family law case. In principle, adding Without Prejudice can ensure that what you have written won’t be used against you at a later date.

What does Without Prejudice mean?

When you receive a letter or an email with the words “Without Prejudice” written at the top, this means that the person writing it doesn’t admit to anything, concede any argument, or alter their position.

In legal circles, Without Prejudice (WP) is often used when one party in a legal case is making a genuine attempt to negotiate in a dispute with the other. This means you can discuss a settlement or agreement without the worry that you might write something that would weaken your position in future negotiations, discussions, or in court.

Without Prejudice in action

If you want to settle your dispute out of court or keep litigation costs to a minimum where there are court proceedings issued, Without Prejudice offers a useful tool in the process. Both parties are more likely to reach an agreement if you both feel you can be open and direct. Furthermore, if you do admit anything in the process of trying to get your matter settled (intentionally or not), that admission won’t be used against you in future.

In fact as part of Financial Remedy proceedings, it is compulsory to put forward Without Prejudice offers before the Financial Dispute Resolution hearing, which is a settlement hearing.

When should I use Without Prejudice on correspondence?

Marking your communications Without Prejudice (WP) usually means that that those communications are confidential and cannot be shown to a court unless everyone who received that communication agrees it can be shown.

You might actually decide that communications don’t need to be confidential, and so you won’t use Without Prejudice. This action automatically makes the information available to a court, and the other parties, etc. This is known as an “open” document.

Where should I write Without Prejudice on an email or letter?

There’s not hard and fast rule about where precisely you write Without Prejudice on correspondence. Established etiquette is that it’s written at the top of a letter or document, so the reader can see it before they read the rest.

The same applies to emails, so Without Prejudice should feature in the Subject line of your email. The aim is to be upfront about it, so the recipient knows your position.

What does “Without Prejudice save as to costs” mean?

“Without prejudice save as to costs" (WPSATC) means that if you cannot resolve your dispute, correspondence marked WPSATC can be referred to by the court when calculating costs. A WPSATC document could prove, for example, that you took all reasonable steps to try and settle your dispute before coming to court. It’s no mark of guaranteed success, but it is more flexible. If you just marked it WP, then it could not be shown to a court once the final decision on the case has been made, and the court is considering costs and whether to make orders.

With every case, we would advise that you consider the complexities of a family law matter and in particular financial settlements, and obtain independent legal advice.

Regardless of whether something is marked WP, like a game of poker, you are showing your hand. You have to be prepared that parties can become set in their minds and it can be difficult to move them from that position.

Need advice on Without Prejudice or offers for financial settlements?

Contact us to book your initial 1-hour consultation to discuss your situation. Your 1-hour online session includes 30 minutes free, so you have a full 60 minutes with one of our Directors to get to the detail of your matter.